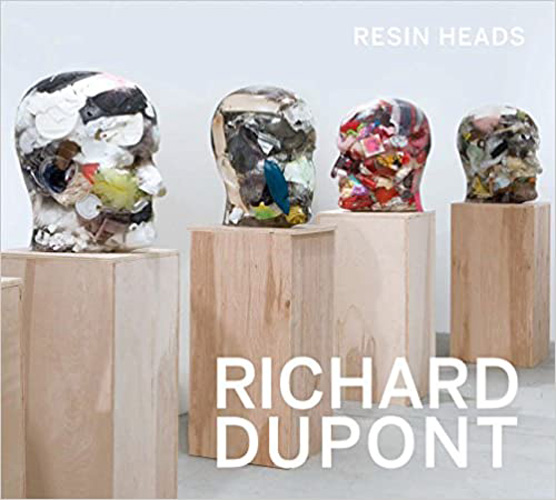 A catalogue of the artist's "Resin Heads" series, spanning 2011 - 14. The resin heads began, in part, as a practical response to a real situation. Some 10,000 pounds of material by-product, the accumulated result of a decade of art making and living, had begun to pose a problem. The solution, beginning in late 2010, was to use all of that collected material to create a new series of works. A mold of a head form was made from a digital enlargement of my head. Into that empty mold, material was "dumped" until the mold was full. A water-clear, archival UV stable resin was then poured into the mold, filling all the remaining space not occupied by the objects, and resulting in a dense, solid cast form. The water-clear UV stable material serves a dual purpose. In addition to being archival itself, it also suspends the deterioration process of whatever objects are imbedded within the sculpture. In this regard, the resin heads are a series of time capsules, but they are also about an uncanny suspension of both time and objecthood. The things and memories captured within these works are not mine alone. Much of the material is found, salvaged, collected and recycled. The process is ongoing. The head form is used as a vessel or container, rather than as an armature for a portrait. In this sense, the resin heads become, anthropologically speaking, a repository of material culture. They conflate hermetic activity with universal language. Collectively, they form a total gesture and an encyclopedic catalogue of materials, memories and experiences from the personal to the anonymous.